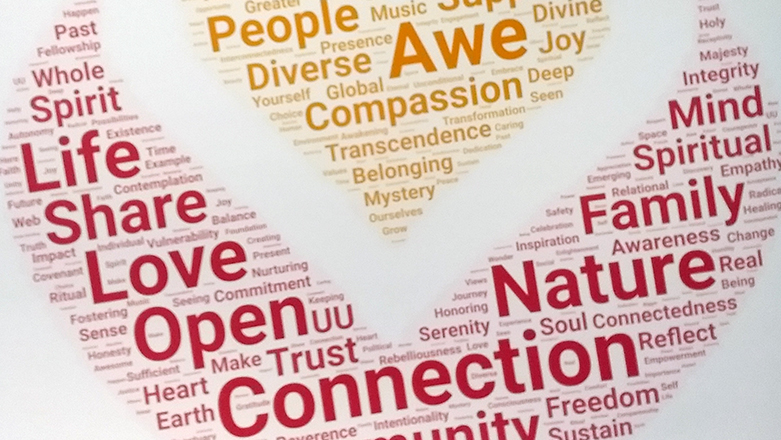 Were you one of the 350 participants in the 22 visioning sessions that a heroic team of volunteer facilitators led last month, supported by our wonderful staff here at Foothills?

Were you moved and inspired by the time spent thinking about the past and future of this beloved community in the company of long-time and newly-made Foothills friends?

Were you wondering how we were going to turn these many hundreds of value words, stories, and wishes for Foothills’ future into actionable vision statements for the congregation to pursue in the next 5 to 7 years?

We – your Foothills Board of Trustees — were too!

We spent so much time trying to pull together so many sessions that we barely had time to look ahead to the next step in the process. (Our visioning consultant informs us that we exceeded any previous congregation’s participation in both sheer numbers and percentage of congregation taking part, that’s how engaged and enthusiastic Foothills members were in this process!)

We did have faith, however — fueled by many in-person and online meetings with the wise and skillful Laura Park of Unity Consulting — that the process would result in tangible, focused vision statements for the years ahead, visionary dreams that reflect the collective character of this congregation, its long history, and the hopes for its future that so many of you shared with us over the course of these workshops.

The weekend before Thanksgiving, the entire board of Trustees (Ed Beers, Sara Steen, Cheryl Hazlitt, Brendan Mahoney, Glenn Pearson and Sue Sullivan), Rev. Gretchen Haley, Rev. Sean Neil-Barron, and Laura Park spent Friday evening and all of Saturday surrounded by this data — distilling themes and common values and discerning where we saw the congregation wanting to go in the coming years.

The shared values we discerned will serve as touchstones for our board decisions and the policies that we write, and as guides and anchors for all that we do together as a congregation.

The vision statements that we identified will become our promises to each other and the larger community. They are what we will be asking ourselves to do together as a beloved community in the next 5 to 7 years. They represent what we want our ministers to lead, equip, and support us in doing – for us as individuals, for the Foothills community, and for Northern Colorado and beyond.

Because the task was so ambitious and the feedback was so generous from the many participants, we didn’t quite finish the work that weekend before Thanksgiving. There is some wordsmithing left to do, and perhaps some whittling down of a vision statement or two into a more manageable charge to the congregation and its ministers.

As a board we will finish that work up next month, and we’ll present the final values and vision statements to the congregation at our half-year congregational update meeting in late January.

We are deeply grateful that so many of you participated with such presence and enthusiasm. Unitarian Universalist churches are congregationally led – without the input of an engaged congregation, we cannot live into our spiritual ideals of embodying the democratic process and making collective decisions about our congregation’s life.

In faith and love,

Raised moving around a lot, Destiny enjoys connecting with all people. She has a passion for growing her community in love and compassion. You will mostly find her taking Polaroids to add to her collection, or finding the newest brewery.

Dolhathai “Kloy” Intawong received a Bachelor of Music in Vocal Performance from the College of Music at Mahidol University. As Thailand’s representative, she participated in the Choir Olympics at the 4th World Choir Games 2006 in Xiamen, China, the 5th World Choir Games 2008 in Graz, Austria, and the 7th World Choir Games 2012 in Cincinnati, USA. Kloy completed her master degree in Choral Conducting at Shanghai Conservatory of Music where she studied under Maestro Cao Tong Yi.

She is a Choral Conducting graduate student at the University of Northern Colorado. Kloy has, since completing the first year of her doctoral studies, served as graduate assistant/TA for the UNC Chamber Choir and Concert Choir, as well as conductor of the University Singers. Additionally, she has served our UNC opera department in the capacity of chorusmaster. Named recently by faculty as Outstanding Graduate Student, She received award in the conducting area.

More recently, she was honored being invited to Thailand to serve as choirmaster for the Royal Bangkok Symphony Orchestra under the Royal Patronage of Her Royal Highness Princess Sirivannavari Nariratana. Currently, Kloy is conducting student of Dr. Jill Burgett, and also studies with Dr. Galen Darrough and Dr. Russell Guyver, University of Northern Colorado.

Jennifer studied Social Communication and Journalism with a postgraduate program in Marketing at Universidad Santo Tomás in Bogota, Colombia. For two years, she did social service to help Transgender community of this city. Later, she worked as a journalist at Caracol Radio, which is one of the most important radio stations in her country. During the last 3 years, Jennifer has worked as an account executive in traditional marketing, digital marketing and public relations for different companies. Currently, she is visiting Fort Collins where she was looking for community service, meeting people and learning new things.

Kaley is a sophomore Music Education Major at Colorado State University where she received a Music Scholarship for performance in Euphonium. Kaley has previously worked as a Nanny as well as being the older sister of a three-year-old sibling! Kaley hopes to be a middle school Band Director in the future.

Betsy is very excited to be the Family Ministry Assistant at Foothills Unitarian Church! Having grown up in Fort Collins, she knows the area and community well. Her background includes being a Youth Services Specialist at Platte Valley Juvenile Detention Center, where she supervised and provided support to incarcerated youth for the State of Colorado. She is also an avid volunteer for Partners Mentoring Youth and has worked with at-risk youth for many years. Prior to working for Platte Valley, Betsy worked at AT&T Mobility in sales. She is currently working towards getting a Master’s Degree in Social Work so that she can become a counselor for at-risk youth. In her time off, Betsy enjoys reading non-fiction books and spending time with her pug mix, Igor. She also hikes on weekends and is very passionate about fitness. Betsy’s always open to getting to know new people, so if you see her around please come say hi!