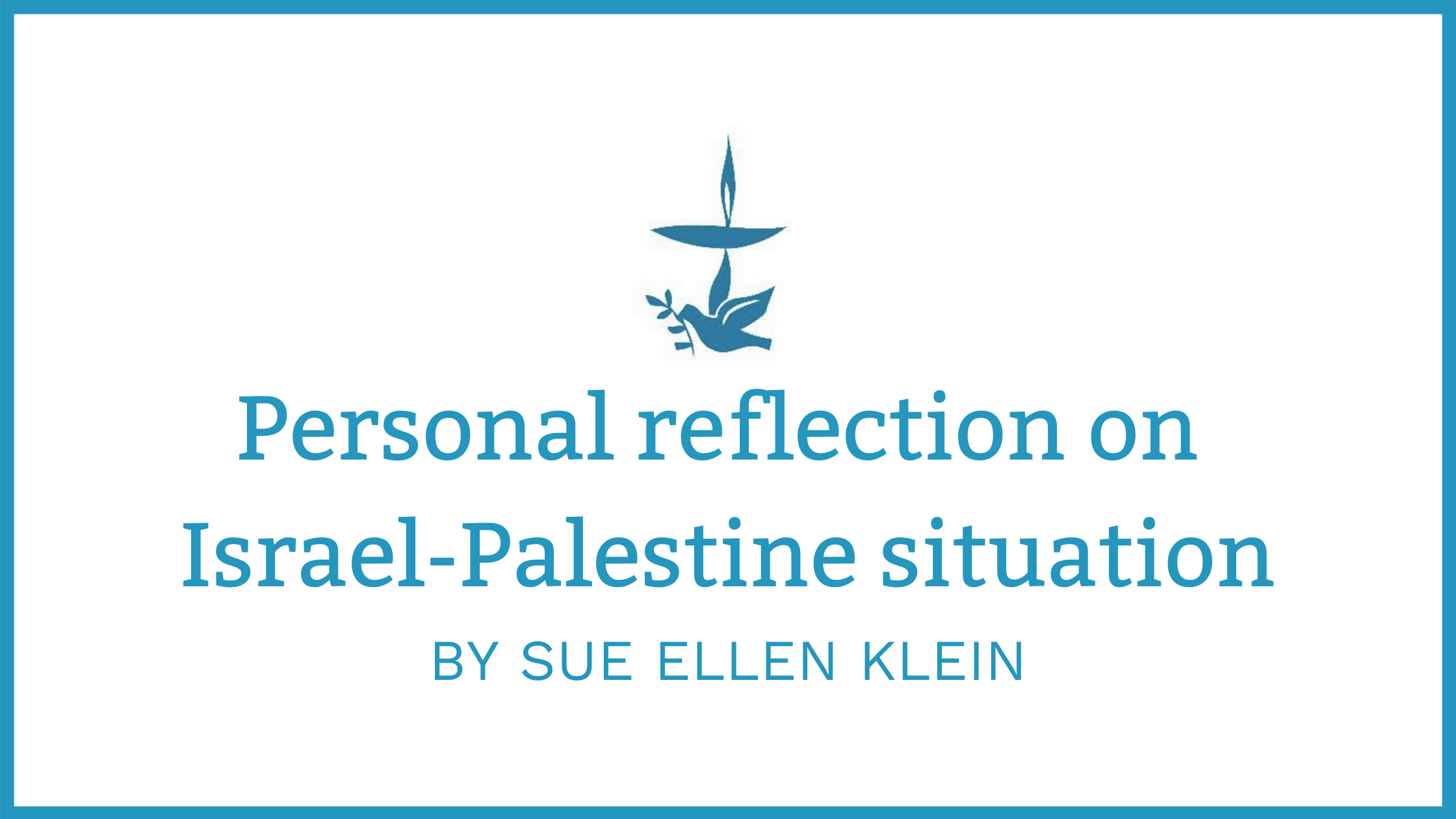 A message from Sue Ellen Klein, the leader of Partners for Peace and a member of our Unitarian Universalists for Justice in the Middle East team.

As a spokesperson for Partners for Peace,
I feel compelled to comment on the current Israel-Palestine situation.  With all that is being shown and written about the situation, I can only respond from my heart and my own personal experience. As an American, Jewish woman – as a living being – I am heartbroken, disgusted, and ashamed, as I have been for many years. I am neither a historian nor a religious scholar. I simply choose not to be silent, despite my own sense of vulnerability.
Born in 1941, I grew up in a Jewish home, more secular than religious. As for so many like me, the film ‘Exodus”* defined our perception of Israel as the sacred safe haven for Jews around the world.  We raised money to plant trees in Israel; we bought and gifted Israel bonds. I attended Hebrew school until I was confirmed at age 15. I knew nothing of the Palestinians or the Nakba** – or, for that matter, of what it means to be a Jew in the context of contemporary America or the world.
During much of my life, support of Israel was a significant activity. My family visited Israel many times and developed strong Israeli friendships. I have come to understand that affiliation with Israel became synonymous with Jewish identity rather than a religious imperative.
When I moved into center city Philadelphia, I began a journey of activism and community engagement which informed and crystallized my deeply held sense of justice. Among new affiliations, I joined an activist congregation, Mishkan Shalom, founded by Rabbi Brian Walt, a rabbi raised in apartheid South Africa and the founding executive director of Rabbis for Human Rights – North America. It was through Rabbi Walt that I began to understand what I now know to be true. Click here for a recent opinion piece on Israel-Palestine by Rabbi Walt.
I was a founding member of the Jewish Dialogue Group, which sought to provide a process for progressive Jewish activists, representing varied issues, to work collectively despite differences of opinion on the ‘Israel-Palestine conflict.’  We were not particularly successful in this endeavor, and I understood that it is within the Jewish community itself that the wall of silence and intransigence is the most pronounced.
I share the opinion that the government of Israel acts to subjugate, suppress and expel the Palestinians from the Biblical lands which it essentially views as its own.  Its dehumanization and denial of basic human rights are racist, self-evident, and illegal, and the United States government must hold the Israeli government accountable and responsible.
I agree with Rep. Ayanna Presley:  “We cannot remain silent when our government sends $3.8 billion of military aid (annually) to Israel that is used to demolish Palestinian homes, imprison Palestinian children, and displace Palestinian families.  A budget is a reflection of our values.”
I feel kinship with and have great admiration for the Israeli people; they are smart, and courageous, and, I believe, kind.  And yet,  ‘Justice, justice shall you pursue’ –  we are taught that the pursuit of justice has, from the beginning, been a fundamental tenet of Judaism.  What does this mean in the context of Israel’s treatment of the Palestinian people?  When, if at all, do Biblical readings and past realities override the responsibility to defend human rights and dignity?  It is a dichotomy with which many Jews live.  I have made peace with my decision.
In peace,  Sue Ellen
* Watch ‘Exodus 1947,’ a fascinating one-hour PBS documentary narrated by Morley Safer about the true story of the resurrected ship, renamed Exodus 1947, and the ‘illegal’ American efforts to finance and crew the most infamous of 10 American ships that attempted to bring Jewish holocaust survivors to Palestine after WWII against British resistance.  (Available for free on Amazon Prime or to rent  for $.99.)** Nakba – the displacement of Palestinian society, known as the Nakba (Arabic: النكبة‎, al-Nakbah, literally “disaster”, “catastrophe”, or “cataclysm”), in which between 400 and 600 Palestinian villages were destroyed and Palestinian history erased.  (Wikipedia