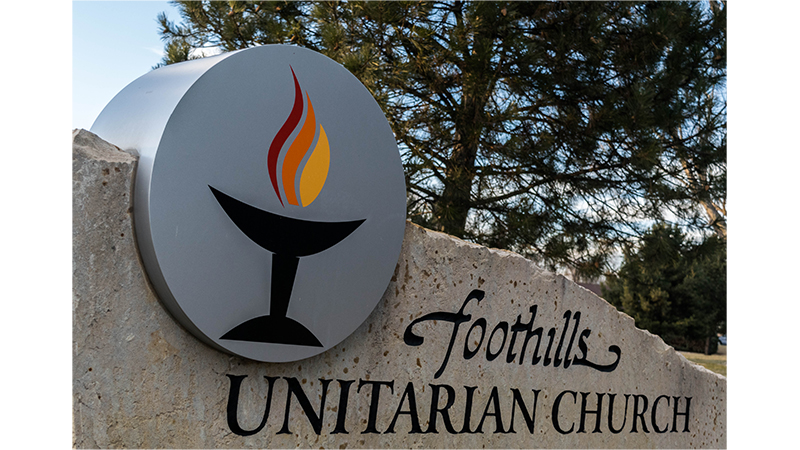 “Some of the walls were the same. The roof was the same. Important changes had been made, but the sense of continuity which a building often comes to represent was unbroken. The continuity is one of the structure, but also of far more than that. It is a continuity of people and of memory.”

–Rev. Walter “Roy” Jones, Minister of Foothills Unitarian Church from 1972-1989, speaking at the celebration of Foothills building expansion on January 19, 1997.

Look closely enough and you notice the ways our church has grown over the years. The cornerstones in the breezeway is emblazoned with names that defined who we once were, Unity Unitarian Church and Congregational Unitarian, but are no longer. The way the hallways in the Religious Education Building suddenly nearly double as you reach the more recent addition, added in 1997. Old photos show the sanctuary absent the stone wall that now plays backdrop to our worship gatherings, the direction of the chairs at an angle facing the pulpit then placed where our piano now resides. Even this morning, when I took a moment to visit the Remembrance Garden for a moment of tranquil reflection between meetings, I noticed a plaque that read 2003.

Our walls have expanded over the years, each time meeting the needs of a time and a people. And yet, as Roy contends, through each change, there has remained a continuity of structure, of people, and of memory.

During our two worship services (9 & 11) we will celebrate Flower Communion, a ritual born in 1923 by the Czech Unitarian Minister Norbert Capek, who sought to build a ritual that would feel as connective as the Christian practice of communion, while inviting people of all beliefs and backgrounds to participate fully. He settled on a practice where each person brings a flower and after a blessing in the service, leaves with a different flower. Change Yet Continuity.

At 12:30 we will gather again the Sanctuary for our Annual Meeting, where we will vote on the ordination of Kristen Psaki (our intrepid ministerial resident), adding her into the lineage of ministers who were formed by and who formed this congregation. We will pass budgets and elect a slate of nominees for our Board of Trustees, Nominating Committee and our Endowment Committee, adding their faithful presence and wise counsel to our church’s leadership.

And we will see for the first time, together, the plans for our future building expansion, when Peter Ewers (the architect our church has hired) unveils a vision for our future campus to be built on our current site. Change yet continuity.

It’s a historic Sunday, you don’t want to miss it.

P.S. The meeting will be streamed online at Foothillsuu.org/live, but online voting is not possible.